In February, Prince Harry and Meghan Markle — still known as the Duke and Duchess of Sussex — confirmed they wouldn’t be returning to their royal duties. Now, less than a month later, the couple sat down with TV legend Oprah Winfrey to talk about their experiences as members of the British Royal family. The interview, titled Oprah With Meghan and Harry, aired Sunday night on CBS in the U.S. and on Global in Canada.

The pair was candid about their feelings, revealing details about Markle’s first meeting with Queen Elizabeth and discussing their ongoing relationships with Harry’s brother, Prince William, and his wife, Kate Middleton. In the latter part of the interview, Harry, 36, and Markle, 39, held hands and sat opposite Winfrey while she questioned them in a lush garden setting. The couple lives in Montecito, Calif., where they are Winfrey’s neighbours.

Here are six of the biggest stand-out moments from the interview.

Harry reveals why they left the royals

Harry invoked the memory of his late mother, Princess Diana, who had to find her way alone after her divorce from Prince Charles.

“I’m just really relieved and happy to be sitting here talking to you with my wife by my side because I can’t begin to imagine what it must have been like for going through this process by herself all those years ago,” Harry said, adding, “because it’s been unbelievably tough for the two of us.”

Harry said that they left because they asked for help from the “Firm” (a.k.a. the Royal Family) and couldn’t get it, despite constant haranguing by the British press.

“It was a constant barrage ,” said Harry. “My biggest fear was history repeating itself. Add race in, add social media… something happening in the same kind of way . To receive no help at all and be told, ‘This is how it is.'”

“It was a lack of support, a lack of understanding,” he said as the main reason for them leaving. “I had to take matters into my own hands.”

He denied outright that he blindsided the Queen, which was a story represented in the press at the time of their exit. He said he had multiple conversations with Prince Charles, his father, and the Queen. In a shocking admission, Harry said that his father stopped taking his calls at one point.

“I just wish that we would all learn from the past,” said Harry.

As for his relationships with the Queen, his father and his brother, William, Harry said that they’re still on good terms, for the most part.

“My grandmother and I have a very good relationship,” he said. “There’s a lot to work through there . I feel really let down because he’s been through something similar. He knows what pain feels like, and Archie is his grandson… but at the same time, I will always love him. There’s a lot of hurt that’s happened… and I will continue to make it one of my priorities to try and heal that relationship.”

“I love William to bits,” he said about his older brother. “We’ve been through hell together, but we’re on different paths. The relationship is ‘space’ at the moment. Time heals all things, hopefully.”

Markle outright admitted that she went into the Royal Family with a certain naivete. It wasn’t long before she discovered that living as a royal is very different from what most people think; later in the interview, Oprah called it the “royal bubble.”

“I don’t know how they could expect that, after all of this time, we would still just be silent if there was an active role that the firm is playing in perpetuating falsehoods about us,” she said. “And if that comes with risk of losing things, I mean, there’s been a lot that’s been lost already.”

And that first time meeting the Queen? It turns out Markle didn’t know she’d have to curtsey in the Queen’s presence, but it was of no consequence in the end — the pair got along swimmingly, according to Markle.

“The Queen has always been wonderful to me. I loved being in her company.”

Despite this, Markle also made the claim that she was silenced.

“Everyone in my world was given very clear directive from the moment people knew Harry and I were dating — to answer ‘no comment.'”

“There’s the family, and then there are the people running the institution,” she said.

Markle addressed the royal rumours that she “bullied” staff and aides, as well as the 2018 story about Markle making Middleton cry.

She said that Middleton, in fact, made her cry.

“A few days before the wedding she was upset about and she made me cry,” she said. “She apologized.”

“I didn’t share that story about Kate to be disparaging,” she added. Markle later called her a “good person.”

There were ‘conversations’ about Archie’s skin colour

Markle said that their son, Archie, wasn’t going to receive security since he wasn’t going to be a prince. When the couple relocated to Canada, the traditional security provided to the royals was “cut off” because of their “change in status,” according to Harry, since they were no longer working members of the royal family.

There were also “several” conversations, according to both Markle and Harry, about how dark Archie’s skin colour would be.

Neither of them revealed which member(s) of the Royal Family partook in those conversations; Markle said it would be “damaging” to their reputation.

The “race issue” added immense stress for both Markle and Harry. It wasn’t just about them being a couple, said Harry, it was “what she represents.”

There were opportunities for his family to show support for Markle, said Harry, but they didn’t.

“I didn’t want to be alive anymore,” said Markle in a startling confession of suicidal ideation. “I thought it would be better for everyone. just cradled me.”

She asked the “institution” if she could escape and get help, but she was denied. Then she went to human resources and they responded in a compassionate manner, but they said there was nothing they could do as she wasn’t a paid employee of the “institution.”

“You have no idea what’s going on for someone behind closed doors,” she said, describing how she felt at a royal event in 2019 that she had to attend, despite her intense mental-health struggle. Publications around the world posted photos of that event, saying how beautiful the couple looked — but Markle pointed out how white their knuckles were in the photos, as they clasped hands tightly to make it through. 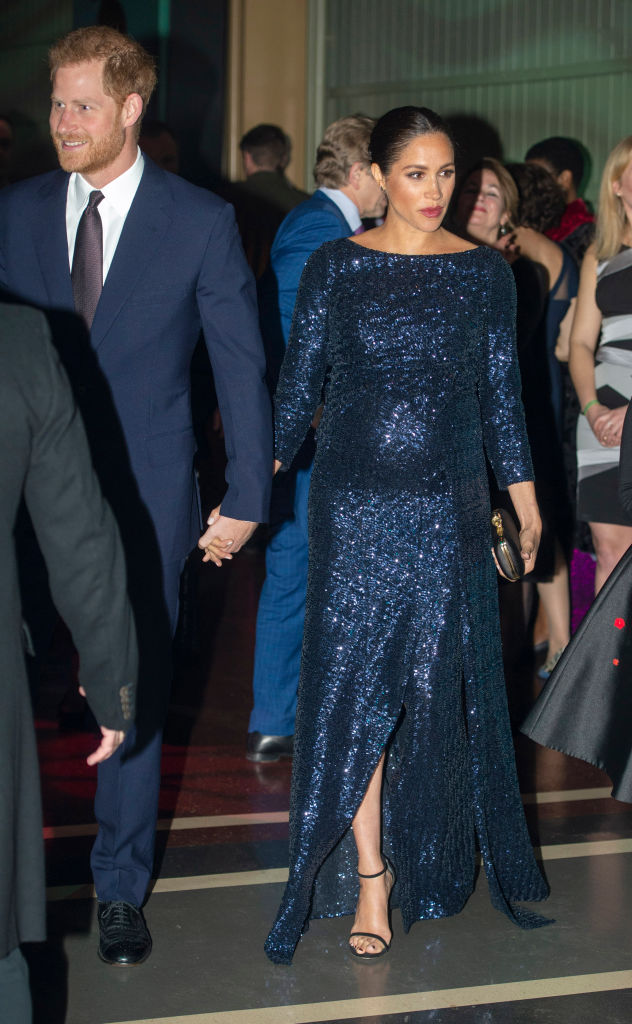 “It’s a very trapping environment,” Harry said of being in the Royal Family. “I didn’t have anyone to turn to.”

“I was trapped, but I didn’t know I was trapped,” he said. “My father and my brother, they are trapped, and I have huge compassion for that.”

The couple reveals the sex of their baby

Markle and Harry revealed together that they’re expecting a baby girl in the summer, and “that’s it.” The pair says they will not be having any more children.

Tongues were wagging prior to the interview as clips were released by CBS. Tabloids and social media users speculated that Markle’s hair and silk wrap dress with a floral design were nods to Wallis Simpson, the former American socialite and wife of former British king, Edward VIII. Edward abdicated the throne in order to marry Simpson, then a divorcée.

On Wednesday, the palace said it was launching a human resources investigation after a London newspaper reported that a former aide had accused Markle of bullying staff in 2018.

A spokesman for the duchess said she was “saddened by the latest attack on her character, particularly as someone who has been the target of bullying herself.”

Stream the full 2-hour special now on the free Global TV App or at GlobalTV.com.

— With files from The Associated Press

If you or someone you know is in crisis and needs help, resources are available. In case of an emergency, please call 911 for immediate help.

For a directory of support services in your area, visit the Canadian Association for Suicide Prevention.

Learn more about how to help someone in crisis.