It hasn’t even been a month since the state of Washington declared a public-health emergency over a measles outbreak, and health officials are reporting a dramatic spike in vaccinations.

Clark County, Wash., has seen over 50 cases of Measles since January — and 47 of those cases occurred to individuals who were unvaccinated. One case occurred even though the person had the MMR vaccine, and the rest could not be verified, according to Clark County officials.

There are also four cases of measles being investigated in neighbouring Oregon, and another case in King County, Wash.

One case is currently under investigation in Vancouver, B.C.

A 2018 study in the journal PLOS shows that the rate of non-medical exemptions to vaccines has risen since 2009 in at least 12 states – naming Portland, Ore., as one of the hotspots. Clark County is located directly next to Portland.

“Measles is a highly contagious disease and if you don’t have immunity, you can get it just by being in a room where a person with measles has been,” Dr. Jeff Duchin, health officer for Public Health in King County, said in a release.

While measles is “highly contagious,” outbreaks like this are rare, because it’s easily preventable with the MMR vaccine.

“Fortunately, the measles vaccine is very effective. Two doses of measles, mumps and rubella (MMR) vaccine provides over 95 per cent protection against measles and that protection is long-lasting,” Duchin said.

Despite this, nearly seven per cent of children in Clark County were exempt from the vaccines required for kindergarten in the 2017-18 school year for “personal or religious” reasons, the Washington Post reported. (Another 1.2 per cent were exempt from the requirement for medical reasons.) 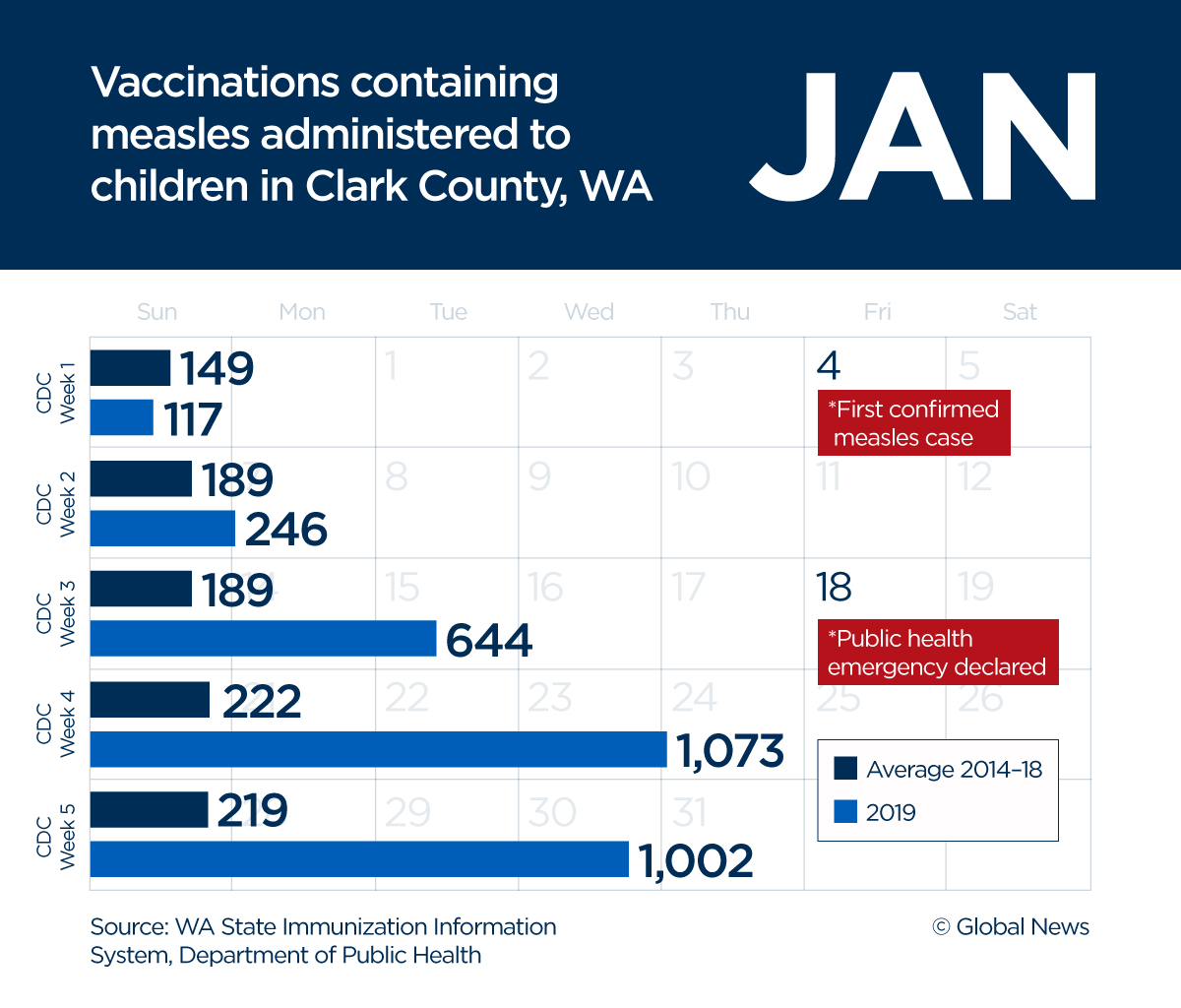 But since the outbreak was declared an emergency, Washington state health officials saw a dramatic increase in the number of vaccines administered.

During the first week of January, only 117 vaccines containing measles were administered to children under 18 years old in Clark County.

But by the last week of January, more than 1,000 vaccines were administered.

Compared to the average of the previous four years in the same time period, that’s nearly a 500 per cent spike. 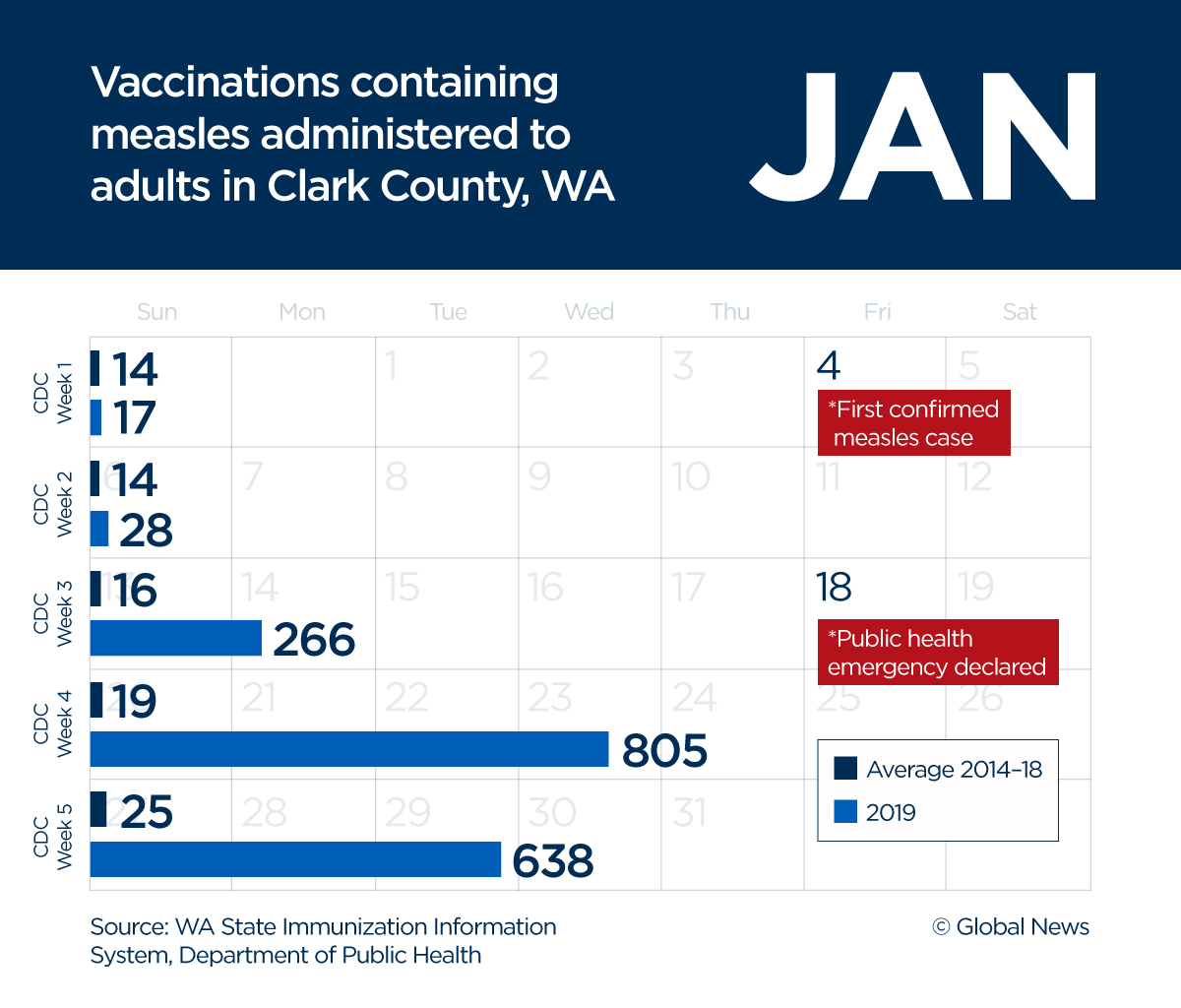 In King County and the rest of Washington, vaccination rates had previously been higher on average, and therefore a smaller spike was seen – but the number was still nearly double the previous yearly average for children, and triple for adults.

READ MORE: Some travellers through Toronto Pearson Airport might have been exposed to measles in January

“However, the fact that vaccine-preventable diseases like measles are able to spark an outbreak like this shows us more people need to be vaccinated.”

Measles is a highly contagious viral disease that can cause hearing loss and brain disorders in children, and in severe cases, can kill.

Vaccination coverage needs to be around 95 per cent to prevent the virus from circulating in communities.

In Canada, Statistics Canada reports that 89 per cent of children under two years old had received the MMR vaccine, which vaccinates for mumps, measles and rubella. It didn’t list reasons for why 11 per cent hadn’t been vaccinated.

READ MORE:
Measles cases tripled in Europe last year — the highest it’s been in a decade